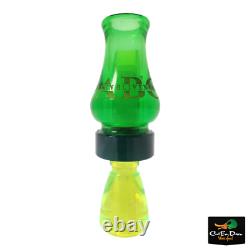 The ABC Timber Call is designed for calling in timber, swamp, and duck impoundments. This call has a very raspy, ducky tone that will put the finishing touches on wary mallards. Allen Bliven Duck calls began in 2001 when owner, Allen Bliven, began turning waterfowl calls as a hobby in the offseason.

Years later, Allen Bliven Calls is a leading waterfowl calls manufacturing company in eastern North Carolina. Their calls have been used to capture over 85 Waterfowl Calling Championships since 2005.

This item is in the category "Sporting Goods\Hunting\Game Calls". The seller is "cutemdownwaterfowl" and is located in this country: US.

This item can be shipped worldwide.