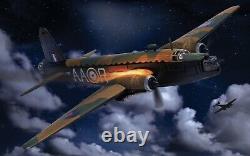 CORGI AA34812 1/72 VICKERS WELLINGTON RAF No. 75 (NEW ZEALAND) SQN L7818 JAMES ALLEN WARD RAF FELTWELL, ENGLAND JULY 7TH 1941 - IN STOCK. Having successfully released their bombs over the German city of Munster on the night of 7th/8th July 1941, the crew of Vickers Wellington L7818 set course for their home station at Feltwell and hoped for an uneventful return flight. Those hopes were dashed when co-pilot James Allen Ward noticed a sinister shape stalking their aircraft in the night sky, a Luftwaffe Bf 110 nighfighter. Before he could warn his pilot, the enemy fighter positioned itself under the Wellington and unleashed a hail of bullets and cannon shells into its fuselage, leaving it severely damaged and on fire.

On seeing the severity of the fire, the pilot instructed Ward to prepare the crew to abandon the aircraft and as a parting, ironic comment in this desperate situation, also said, see what you can do about that damned fire! Ward took him at his word, cutting a hole in the fuselage of the bomber and attempting to extinguish the flames using fire extinguishers, however the savage slipstream made these efforts futile.

What he did next was quite extraordinary - he crawled through the astrodome hatch on the spine of the bomber and onto the wing of the aircraft. Clinging to the exposed geodetic framework of the Wellington, Ward slowly made his way to the wing fire and stuffed a canvas sheet into the gaping hole, putting out the fire in the process. Completely exhausted due to the slipstream, he was pulled back into the aircraft by his crewmates, who could hardly believe what they had just witnessed.

Though still badly damaged, the bomber made it back to an RAF emergency landing ground and the crew all survived this incredible ordeal, thanks to the selfless act of bravery performed by Sgt James Allen Ward. Designed to meet a British Air Ministry specification for a two-engine bomber, the Wellington was first flown on June 15th, 1936. Used as a night bomber in the early years of the Second World War, the Wellington defended itself with machine guns: two in the front turret, four in the rear turret and an additional two in beam positions. Later in the war, the Wellington served as maritime patrol, anti-submarine. Equipped with radar and used as an Early Warning and Control aircraft, it operated at an altitude of some 4,000 ft over the North Sea, controlling Mosquito fighters intercepting He 111 bombers.

Corgi Aviation Archive Collector Series. The Corgi "Aviation Archive" range presents highly-detailed, ready-made diecast models of military and civilian aircraft. The vast Aviation Archive range has become the standard by which all other diecast airplane ranges are judged. Each Corgi model is based on a specific aircraft from an important historical or modern era of flight, and has been authentically detailed from original documents and archival library material. Famous airplanes and aviators from both military and commercial airline aviation are all honoured.

Selected moving parts such as gun turrets, control surfaces and swing-wings. This item is in the category "Toys & Games\Diecast & Vehicles\Aircraft & Spacecraft\Contemporary Manufacture". The seller is "buygoneworldlimited" and is located in this country: GB. This item can be shipped worldwide.